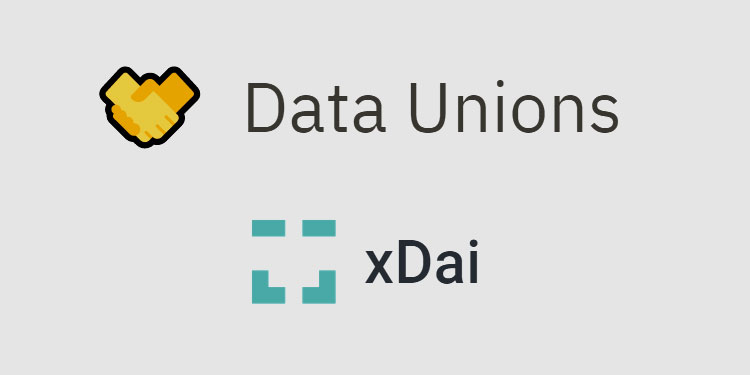 Streamr Network, a layer-0 protocol for real‑time data, today announced that its Data Unions 2.0 upgrade is now live on Ethereum mainnet and xDai chain, and all-new Data Unions deployed via the Streamr Core app will use the new architecture automatically.

The Data Union framework is a data crowdsourcing/crowd selling solution built as part of the Streamr stack. Working in tandem with the Streamr Network and Ethereum, the framework powers apps that enable people to earn by sharing valuable data.

The previous-generation Data Unions framework used the Monoplasma off-chain solution for scalability, while Data Unions 2.0 is fully on-chain and implemented as smart contracts. While the gas costs on Ethereum mainnet are currently sky-high, Data Unions 2.0 can run on any Ethereum-compatible sidechain for scalability and affordable cost of operation. The first supported sidechain is xDai, and other options may be added in the future.

The benefits of having Data Unions fully on-chain are many. First of all, the security of the system becomes as strong as the security of the underlying blockchain itself. Secondly, Data Union members and builders get to benefit from composability, network effects, and services available on the same blockchain, particularly DeFi platforms.

Previously, Data Union members such as Swash users needed to withdraw their earned tokens to Ethereum mainnet in order to do anything with them. With current gas prices on mainnet, this has become unfeasible, and tokens are being kept “hostage” by high transaction fees.

With Data Unions 2.0, tokens can optionally be withdrawn and used on the sidechain – for example, swapped to some other tokens using a DEX present on that sidechain. The transaction fees on sidechains are orders of magnitude cheaper than on Ethereum mainnet, making it much more feasible to move around even small amounts of value. On xDai, transactions currently cost only fractions of a cent, compared to transactions costing tens or even hundreds of dollars on mainnet.

In addition to the architectural changes, the upgrade also comes with some new features requested by builders. Data Unions now support gasless withdrawals via meta transactions. This means that Data Union admins can optionally pay the transaction fees on behalf of members, potentially enabling a better user experience.

The excessive gas costs on the Ethereum mainnet can only be worked around by moving away from the mainnet. Data Unions 2.0 is a step in that direction, enabling many Data Union members to use, trade, or transfer their earned tokens without ever bridging them to mainnet. A growing amount of DeFi platforms and liquidity is available on sidechains, and in the future tokens can even be bridged between sidechains to access additional services or liquidity.

For example, the xDai team has deployed a beta version of a bridge between xDai and Binance Smart Chain, allowing tokens to be withdrawn from xDai Data Unions even to Binance Smart Chain without going through the expensive Ethereum mainnet. As sidechain and bridge technologies are developing very quickly at the moment, and the Steamr team expects to see many new possibilities enabled over the course of this year.

Any transactions on the mainnet, including bridging tokens to sidechains, are still expensive. Parts of the Streamr ecosystem, in particular the Marketplace, are still on mainnet, and purchasing access to data products can cost tens of dollars in fees, often more than the price of the data subscription itself. This severely limits the usefulness of the Marketplace at the moment, which is also the case with most other dapps on Ethereum.

While Data Union teams can fall back to more traditional interactions with potential data buyers as a temporary solution, it’s clear that the Marketplace along with other smart contracts in the Streamr ecosystem will eventually need to migrate to sidechains, and the team will continue working towards this goal to completely solve the issue of unacceptable transaction fees.