The pound reacted with a decline to the publication of UK GDP data, ignoring the positive data on industrial production, which grew by 1.3% in October (against the forecast of +0.3% and growth by +0.5% in September).

The pound remains under pressure due to uncertainty in trade negotiations between the UK and the EU. British Prime Minister Boris Johnson and European Commission President Ursula von der Leyen held a three-hour meeting last Wednesday. However, no progress was made in the negotiations, according to media reports. Now the deadline for closing the deal is set for this Sunday.

After this meeting, the head of the European Commission Ursula von der Leyen said that both sides “are far from each other”. Boris Johnson also said the differences remain significant and it is unclear if they can be overcome.

But even if an acceptable trade deal is concluded, the UK’s GDP can recover to pre-crisis levels only by the end of 2022, according to economists, and then only in the case of successful vaccination and overcoming the consequences of the coronavirus in a short time.

GBP / USD surged to 1.3540 mark last week, its highest level since June 2018, amid a weakening dollar and hopes that the UK and EU can finally strike a trade agreement.

However, GBP / USD is declining today and this week, trading at the start of today’s European session near 1.3300 mark (see “Technical Analysis and Trading Recommendations”). 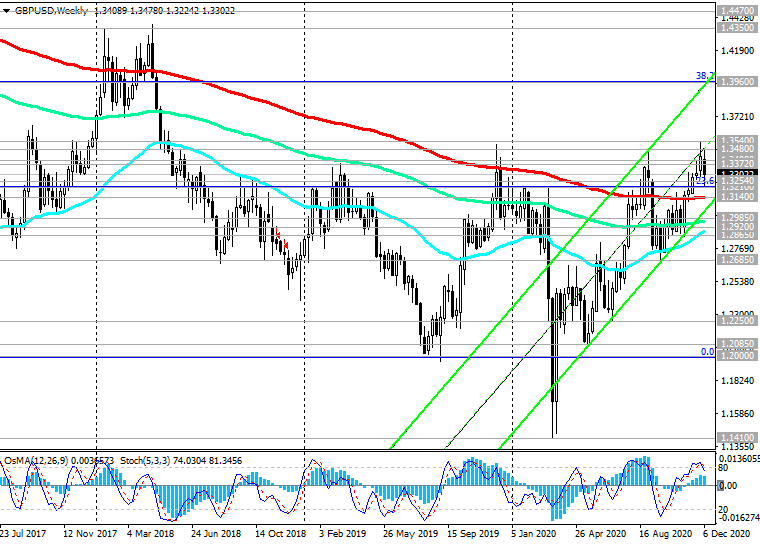 The country’s economy will face many challenges in the coming months, including a slowdown in GDP growth after a sharp drop in the first half of the year, rising unemployment and large corporate debt. It is possible that the Bank of England will also join the budget support from the UK government, which may expand the quantitative easing program and further lower the rate, which is already at the level of 0.1%.

The next meeting of the Bank of England is scheduled for December 17, immediately after the Fed meeting (December 15-16). And today, market participants will follow the ECB meeting. Its decision on rates will be published at 12:45 (GMT), and at 13:30 the ECB will start a press conference. During this period of time, one should expect an increase in volatility in the entire financial market, and the more unexpected the results of this ECB meeting are, the stronger the volatility will be.