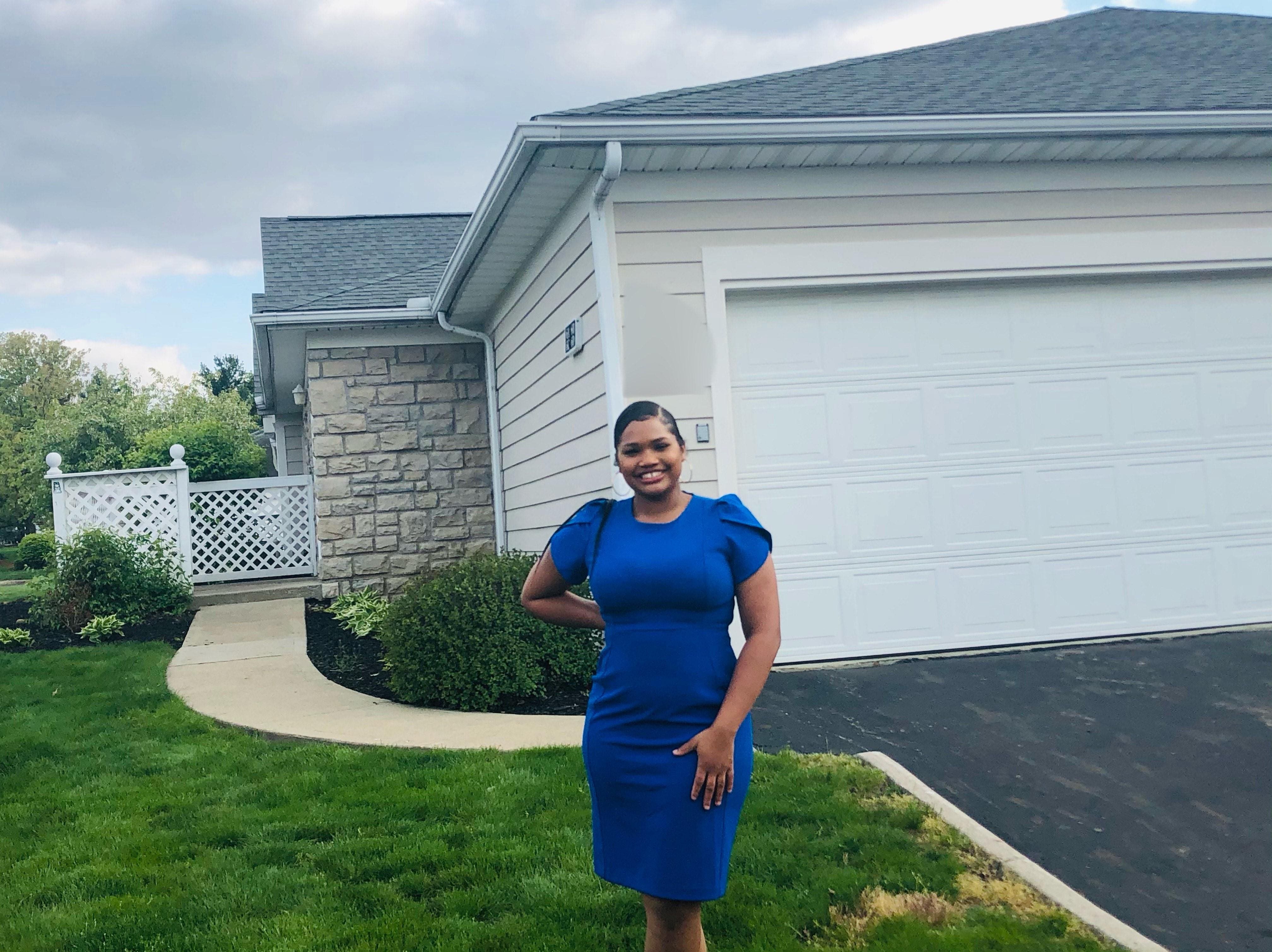 At 19, Chloe Green may not be the youngest U.S. teen to buy a home, but she is among a select group of Gen-Z homebuyers who are hoping the trend takes off.

Green, who grew up in Columbus, Ohio, closed on a two-bedroom, two-bathroom condominium in Canal Winchester on April 22.

Since posting her story on Facebook, Green said many young people have opened up about their homeownership dreams, asked for advice and thanked her for being an inspiration.

“You’re never too young — or too old — to make your dreams come true. When people read my story on social media, they will post responses like, ‘I’m next’ or ‘I’m going to beat that record.’ I say, ‘Yes, please do.’ There are a lot of young people doing great things, and we need to promote these stories and send positive messages about the benefits of owning a home,” she said.

Green, an office manager at Trusted Motors LLC, started working at the Columbus auto dealership at 15. She is also the lead preschool teacher at It Takes A Village Early Education Center in Canal Winchester.

In addition to juggling two jobs, Green is a psychology major at Franklin University.

No, she doesn’t want to be a psychologist. “Everyone asks me that. I’m interested in psychology because of my work with children. I want to be better at my job and learn more about how the brain and the emotions work together,” she added.

Green started dreaming about buying a home when she graduated from high school at 16. Having secured a job, the teen began building credit, opened a Roth IRA and started to save. By the time she started looking for a home in November, she had saved $20,000.

“I planned to buy my first home by my 18th birthday, but then the pandemic hit, so I had to adjust my timeline. Once I missed that first goal, I became even more determined to buy at 19,” she said.

Why buy? “I wanted to build equity and generational wealth and knew that buying a home would help me reach my goals. I also wanted Chloe’s place, my space, my area and somewhere that I could call home,” she added.

While she’s not alone, Green is ahead of the curve. According to the NATIONAL ASSOCIATION OF REALTORS® 2020 Profile of Home Buyers and Sellers, 3 percent of home buyers were between 18 and 24 in 2020, and the average first-time buyer was 33.

Green’s Godfather, Bobby Mitchell, sold a home with help from Julian “Zeus” McClurkin, 34, an agent with Golden Gate Real Estate in Louis Center, Ohio, and a member of the Harlem Globetrotters. Mitchell suggested that his Goddaughter start looking at properties on real estate websites, send listings that interested her to McClurkin and start viewing homes.

McClurkin joined the Harlem Globetrotters in 2011. However, when COVID furloughed the team in March 2020, McClurkin, who was expecting his first child with his wife, had to pivot. So he took his real estate exam and started helping clients buy and sell real estate in April. Green’s Godfather, the pastor at her church, was McClurkin’s first client and spread the word about the young agent.

“Pastor Mitchell marketed me to his entire sphere of influence, and Chloe, who is his Goddaughter, is somebody he trusted me with. The rest is history,” McClurkin said.

Green and McClurkin looked at about 40 to 50 homes from November to March. Still, with a seller’s market driving demand and limiting viewing availability ahead of contingency offers from other buyers, the hot market created challenges. The duo lost every offer but the last one.

“Everybody tells me this is the craziest market they’ve ever seen, but it’s the only market I’ve ever known,” McClurkin said. He plans to continue selling real estate and return to the Harlem Globetrotters when they start touring again. “My schedule with the Globetrotters is very flexible,” he noted.

Initially, McClurkin thought Green was in her early to mid-20s. He found out her age while speaking with Andy Beigel, who originated Green’s loan through NFM Lending in Columbus.

Because Green had proof of income, tax returns for two years, assets and a solid credit score, she qualified for a $185,000 loan.

“Andy told me we got the approval, and I asked him, ‘Does it say here that she is 19?’ He said, ‘Yes.’ But Chloe is a bit of an anomaly because she doesn’t act young, even though she’s 19. She is very coachable and teachable and came to me with a bit of knowledge about real estate. She had done some research. She also came with some knowledge about money — how to save money and build credit, which are skills I didn’t have at 19,” McClurkin said.

Green’s best advice for young people who want to buy a home is to start planning early.

“You are never too young to start building credit. I got on a family member’s credit at a young age. Once I had some credit, I got a secured credit card and paid that off every month. Then, I got my own credit card and paid that off every month. For parents who want their children to buy a home at 18, it is crucial to think about creative ways to build a credit history. Also, start saving. Instead of eating out, cook. It doesn’t matter if it is a dollar here or there; just start saving. If I hadn’t started saving, I wouldn’t have been able to buy at 19. The Roth IRA forced me to save. That money was locked away. I took out $15,000 without any penalties for the down. But if you start saving, the sky is the limit,” she said.

While searching for properties, Green turned on the notification buttons on Apps for Zillow.com and Realtor.com and got enrolled in the local real estate MLS listings.

“Sometimes I would see five houses in a day,” she said.

The process took its toll.

“The uncertainty of not getting my offers accepted was hard. When I started looking in November, I had momentum and was fired up, but by March, it was disheartening. Not knowing whether it would happen and if a home was the right for me was the biggest challenge. But I kept believing that if the house was for me, I would get it,” Green said.

“Finding that house was a miracle. The home was in the heart of Canal Winchester, which is where I wanted to live, close to all my favorite shops and restaurants and 10-minutes from work. So I called Julian to arrange a showing. As soon as we stepped through the door, I just knew this was the one. We had looked at three houses the day before, and I was starting to feel like I had to settle on something, even if I didn’t love it. But as soon as I walked in, I knew this was the one. I love the closet space, and a girl has to have a lot of closet space,” she said, laughing.

“It has a two-car garage and a large side space in the garage with room for games and events so that I can be the ultimate host. Also, the neighbors came over to see me, which is great because being so young, you want to be in a safe community,” she added.

When McClurkin called to say she got the home, Green was delighted. Her $900 monthly mortgage is less than the $1,300 she was paying in rent for a two-bedroom apartment.

“After being told no so many times, I couldn’t believe it. I was super excited,” she said.

Moving forward, Green plans to pay off the home as quickly as possible and move onto the next property, “a rental or an investment property. I know the first one is the hardest. But I am passionate about building generational wealth,” she added.

Green got the keys on April 22 and is painting and furnishing as she prepares to fully embrace Chloe’s place.

“My favorite space is probably the guest bedroom. I have a small business that is local right now called Coco’s Creations LLC, where I make gift baskets and party favors for every occasion. I have been labeled the best gift-giver in my family. So that second bedroom will be my home office,” she said.

“When I was renting, I didn’t even know the people I was paying. I felt like I was making someone else rich when I could be investing in Chloe. People have lots of New Year’s resolutions. This year, my main goal was to invest in myself and take care of myself in all areas of my life — whether investing in my house or my emotional health, taking care of me was my No. 1 goal. When I saw that my mortgage payment was less than I had been paying in rent, I thought, this is what taking care of Chloe is,” she said. “Instead of paying so much more, I can take the extra money and do something else, whether it is investing in the stock market or taking a vacation or saving for an investment property. It hasn’t been easy. I stood by and watched other people get houses, and now I feel like this is my time. I did it.”